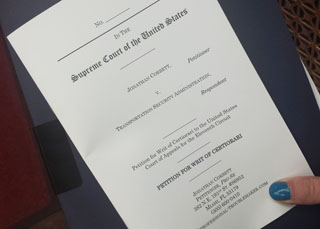 I started this blog about 4.5 years ago with a simple, 5-page complaint stating that imaging my body as a condition of flying violates my rights. The case was filed in a U.S. District Court, then went to a U.S. Court of Appeals, then denied a U.S. Supreme Court review, then back to the Court of Appeals, and now, back to the Supreme Court. If they refuse to hear my case, litigation around the body scanners is over: my case can’t proceed and a challenge from anyone else would be time-barred. If they accept it, it will be a few more years before anything is final, as we work through the Supreme Court arguments process and then (hopefully) end up back in the Court of Appeals. In the meantime, of course, the government is free to continue to abuse our rights.

The petition is fairly simple and really brings up only two issues:

Let’s see if the high court wants to accomplish something!

Leave a Reply to The Grey Enigma Cancel reply