Last month I wrote about an experience I had in December where, before flying from London to New York, I was required to answer questions by an airline security contractor who would then put a “sticker” on my passport to indicate that I had been cleared. Having someone look at my passport and put a sticker on it was nothing new: I assume many airlines would want to make sure that a passenger has the appropriate travel documents to fly to their destination because the airline may be liable for fines if they transport inadmissible passengers. What was new was that the questions asked had nothing to do with my documents or my flight, but were personal questions: Why was I traveling? How long had I been away? etc.

What I encountered in Heathrow was rather reminiscent of the TSA’s “Screening of Passengers by Observation Techniques” (SPOT) program it had run domestically. SPOT was premised on the idea that terrorists probably look visibly nervous and can be identified by talking to them. The program wasted nearly a billion dollars before the Government Accountability Office reported that there was no evidence that the program had any efficacy whatsoever. But, passengers could refuse to participate in SPOT and still be allowed to fly, while the security contractor in London told me that I was required to comply. So I wrote to American Airlines, the airline who hired the contractors, and got a reply:

Ah, so these contractors aren’t merely placed there by the airline, they are “controlled by DHS/TSA.” I was not surprised, despite being in a foreign country. So let’s ask TSA what happens if they get a call from an airline stating that someone has declined to participate in these security interviews: 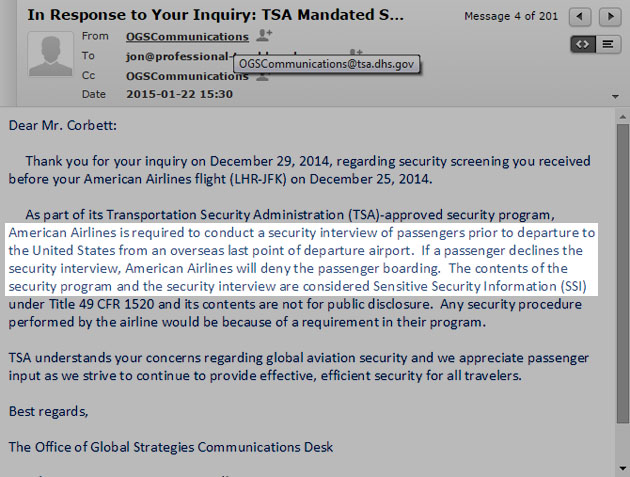 To recap, the airline and government is admitting here that there is a program to interview travelers as a condition of flying. I had never heard of such a thing before. Did I have my head in the sand?

Try a Google search. I challenge you to find a single article, announcement, press release, warning, or other indication that the ability to come home would be contingent on telling the TSA why you wanted to travel, written before I published my story last month. There’s nothing, and that’s because, as the TSA also admitted, the program is conducted entirely in secret, using the pseudo-classification of Sensitive Security Information (SSI).

U.S. citizens have the right to re-enter their home country. We also have the right to remain silent when interacting with government officials. The TSA has secretly tried to trick us into picking only one of those two rights. I instead pick both, as well as my right to petition my government for redress, and have filed suit today against the TSA. I’ve asked four federal judges to rule that the program is an unconstitutional violation of our Fifth Amendment rights and to enjoin the TSA from forcing airlines to hire interrogators to sit outside international gates.

Four federal judges, you ask? The TSA was given special rules for jurisdiction over challenges to certain types of TSA decisions known as “orders.” Orders are challenged in front of 3-judge panels of the Court of Appeals, whereas any other TSA assholery is challenged in front of a U.S. District Court judge. Since the international security interview program is a secret, it can’t be determined whether it qualifies as an “order” or not, and if you accidentally file in the wrong court, you’ll be out of time to file in the others. So, my petition was filed simultaneously in the district court covering the airport where I was flying to (the Eastern District of New York) and the appellate court in my home district (Eleventh Circuit Court of Appeals). Double filing fees and double paperwork means that the TSA can’t evade review by claiming that the program is, or is not, an “order” depending on what suits their mood.