What Donald Trump Has Done to U.S. Department of Justice is Shameful 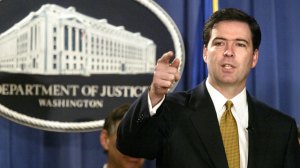 The U.S. Department of Justice is opposing counsel in about half of the cases I litigate; needless to say, I am no apologist for them.  At the same time as being frustrated by their, for example, analogizing my legal arguments to those of a terrorist, doing their best to keep evidence out of the courts, and even obtaining a special gag order just for me, I respect that they serve an important role in seeing that justice is served in our country.  Unlike the TSA, which should be disbanded rather than corrected, the DoJ should be an institution in which we continually place intelligent, loyal, and non-partisan civil servants.

Instead, Donald Trump has done the following:

To be perfectly blunt, it seems to me, based on this pattern of firings, to be far more plausible that Trump has fired these people for not just political reasons, but in order to prevent the exposure of anything from poor decision making (e.g., accidentally hiring a foreign agent to lead the country’s intelligence community) to lying to secretly working with foreign nations.  And, were I Donald Trump and had I nothing to hide, I would certainly at least be aware of the public perception I would be creating by firing these career administrators.

To any extent that Donald Trump has “drained the swamp,” he has either replaced it with new swamp or failed to replace it at all, leaving a hole in our nation’s ability to function.  People like Preet Bharara are not easily replaceable, and Trump should have been begging him to stay rather than asking him to leave.

What Trump has done to the DoJ is shameful.   And, it should go without saying that a special prosecutor needs to be appointed to continue any investigation that Comey was up to before he was fired, because whether or not there’s anything to uncover, the administration of justice requires impartiality beyond what Trump’s team has afforded us so far.

15 thoughts on “What Donald Trump Has Done to U.S. Department of Justice is Shameful”