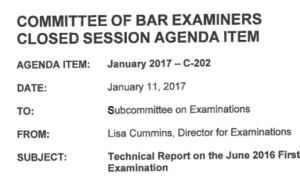 I’ve made a few posts discussing California’s First Year Law Students’ Exam (the “FYLSX”), noting that I failed my first attempt by a fraction of a percent when the Bar applied a grading formula different from that which was advertised, and then, using the knowledge gained of their altered grading scheme, passed on my second try so spectacularly that the Bar published one of my essays as an example of how to write their exam.  I also briefly mentioned that I — as I’m known to do — filed suit to ask a judge to effectively require them to grade like they say they will and be more transparent about the exam and how they grade it.

The particular dispute was that they advertised that the multiple-choice section and the essay section of the exam would be “converted to the same 400-point scale” in order to “give[] these sections equal weight.”  When I received my score report from the first exam, I noticed that the scaling formula used by the bar resulted in it being impossible to score more than about 362 points even if every question was answered correctly, and likewise, it was possible to score far more than 400 points on the essays.

The attorney for the Bar assigned to the case disclosed additional documents, formerly considered to be secret and until now never disclosed to law students, to me yesterday that all but flatly admit that not only were the sections not weighted equally, but they also didn’t use a 400-point scale!  See if you can follow this tortured grading system they describe, because it took me several reads to figure it out:

Multiple-choice raw scores (i.e., number of items answered correctly) were equated to the June 1998, 2011, and October 2013 exams using 21 items that were common to each of these exams.  The equating formula was as follows:

The candidates’ raw total essay scores were scaled to a score distribution that had the same mean and standard deviation as their multiple choice scores using the following formula:

A candidate’s total score was the sum of that candidates’ multiple choice and essay scores.

From this it is clear:

So, for those taking the June 2017 exam, know this: on both exams I sat for, the essays counted far more than the multiple-choice.  You should therefore be spending far more time studying how to write a good essay than how to select A, B, C, or D correctly, unless your multiple-choice practice exams are turning out abysmally (for more study tips, see my previous post).  Hopefully by the October 2017 exam, a judge will have “persuaded” them to abandon this system.