United Airlines Fiasco: Was It “Legal?” 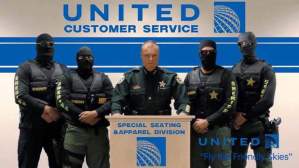 Most have heard by now of the blunder by United Airlines in forcibly removing a man who had paid for a ticket and already taken his seat on the airplane so that they could instead accommodate some of their own employees.  The man was injured when airport police apparently dropped him in the process, and the video taken by other passengers went viral.  To add some gasoline to the fire, the CEO of United tweeted to “apologize for having to re-accommodate” the man, proving that the company obviously misses the point.  This all comes two weeks after the airline was lambasted in the media for its sexist dress code when they denied boarding to two young girls in leggings (this time before the passengers entered the aircraft).

But, the question that I’ve received at least a dozen times in the past 48 hours is: Was what United did legal?  Relatedly, was the man doing something illegal?  Will he win in a lawsuit?

Could United legally remove him from the flight?

The answer to this question is “certainly yes.”  Here’s why.

When you are given permission to enter upon the property of another, legally you are given what is called a “license.”  The biggest difference between a “license” to use property and having, say, a lease giving you the right to exclusive possession of the property for a period of time, is that the license is freely revocable at all times, regardless of whether the licensee and licensor have a contract that says otherwise.

Why?  Because we are dealing with two different areas of law here.  Property law governs the ownership of property and the rights and responsibilities of property owners.  The above rule about revocability of licenses comes from property law.  Contract law, on the other hand, generally allows any party to breach their contract duties at any time, under penalty of having to pay damages to the non-breaching party (see also: “efficient breach” theory).

So, the question of whether the contract of carriage allowed United to remove this man is entirely irrelevant as to whether they had the power to do so.  Either way, United could legally oblige him to leave the aircraft because they are “allowed” to breach any contract they may have had with him, but if he had a contract allowing him to stay, he gets to ask for money.

Was the man doing something illegal?

A friend of mine, who is usually quite on top of things, pointed out that federal law requires compliance with crewmember instructions.  Or, at least, that’s what that pre-flight announcement says, if you aren’t busy blasting music through your headphones during the process.

No person may assault, threaten, intimidate, or interfere with a crewmember in the performance of the crewmember’s duties aboard an aircraft being operated.

While some kinds of defiance may qualify as interference, the duty only attaches while the aircraft is “being operated.”  Before the doors close, not so much.

It is possible he could be charged under some state law for trespassing or resisting the officers, since as discussed above, legally he was obligated to leave, and therefore the officers had the lawful right to use reasonable force to remove him.  It is also possible that he lacked the intent required to be charged, since he believed he had the right to be here — a review of the law of the relevant state would be required and is outside of the scope of things that I care about, and thus this blog.  But, these would be petty misdemeanors, rather than a federal felony, and I do believe the police are now sufficiently embarrassed as to their inability to safely move one man 20 feet without sending him to the hospital that he will face no charges.

Will he win in a lawsuit?

Against whom?  For what?

In order to win against the police, since the officers were lawfully entitled to remove him, he would need to prove that the force they used was unreasonable.  That is, there was a safer way to do it, and a reasonable police officer under these circumstances would have done so.  This is regardless of whether he sues in battery (where “reasonableness” will be a defense) or in negligence (where lack of reasonableness will be an element of the tort).

This is a question for the jury, so I’ll leave it to you guys.  Watch the video with the fact that the police did have the right to eject him in the back of your mind.  Your verdict of liable or not liable depends on whether the police did the best they could given a non-compliant passenger, or whether the means by which they ejected him was unreasonable.

The more interesting one.  The “for what” part of the question definitely matters.

The tl;dr version is that United was probably, mostly, in the legal right.  But, something need not be legally wrong to be morally wrong, or to be a good reason not to do business with someone, or to make you the butt of every joke on the Internet.  United cost itself a lot of money for doing something that its customers don’t like and then pretending that it was no big deal, and this loss will be far greater than anything the man can hope to win in court.

22 thoughts on “United Airlines Fiasco: Was It “Legal?””