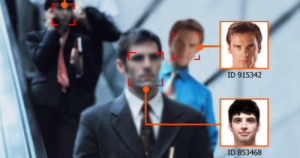 We’re all used to having to identify ourselves as we enter a country.  It is the only way we can hope to have any attempt at a secure border.  But, so-called “exit controls,” where documents are checked as travelers are leaving the country, were popularized last century by Nazi Germany as a great way to ensure that they could control, round up, and exterminate the Jews and other “undesirables.”  It can obviously serve no purpose of keeping terrorists out, because it only affects those who are already in.  The U.S. has never had exit controls, although they remain popular in Europe, Russia, and China.

Last week, privacy advocate and blogger Jeffrey Tucker posted his experience before a flight from Atlanta to Mexico:

Halfway down the jetbridge, there was a new layer of security. Two US Marshals, heavily armed and dressed in dystopian-style black regalia, stood next to an upright machine with a glowing green eye. Every passenger, one by one, was told to step on a mat and look into the green scanner. It was scanning our eyes and matching that scan with the passport, which was also scanned (yet again).

A bit of research uncovered that CBP announced a 2-month pilot program last year for flights between Atlanta and Japan in which they would be doing facial scans as passengers were about to board their flights:.

As part of the testing, travelers will present their boarding pass while their digital photo is taken. The process will take less than three seconds before travelers proceed to the passenger loading bridge to board their flight. Travelers over the age of 14 and under 79 will be required to participate in the test. The test will evaluate CBP’s ability to successfully compare the image of a traveler taken during departure against an image the traveler previously provided, in an automated fashion and without impacting airport operations.

This was, apparently, announced sufficiently quietly that I had not before heard of the program.  The 2 month window has expired, and there is no mention on their Web site, that I can find, of a new program between Atlanta and Mexico.  But, it seems to me that the likely scenario is that CBP has re-started this program and Mr. Tucker confused U.S. Marshals with CBP officers, and retinal scanning with face recognition scanners (not that it makes a difference in terms of our privacy).

What exactly is the point of this?  Are we hoping to catch someone who has overstayed their visa so that we can stop them from leaving, then take them into custody so that the taxpayer can fund their leaving?  It may simply be a dumb idea, or it may be a far more sinister plan to further control the movements of everyone in the country, citizen or otherwise.

Either way, count me out, and I encourage you to refuse as well.