Some “Light Reading” from the TSA, Some Denied Reading from the NYPD 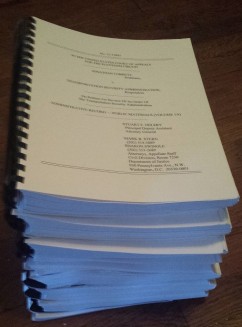 My fight against the TSA’s nude body scanners is approaching the deadline for briefs (in the Court of Appeals, the main briefs are, essentially, the entirety of your case). Pictured here is the “administrative record” as filed by the TSA. Some of it is public record (and will be posted here in full when I have a chance to scan it), other parts are claimed to be secret for various reasons (the release of which will be fought for in court at the appropriate time), and some parts are redacted (as if anything the TSA does would actually dissuade a terrorist). It totals about 1,600 pages (still about 30% shorter than ObamaCare!), and I’ll be asking for a time extension shortly to allow me a full opportunity to comb through each and every page.

My other three suits (illegal detention at FLL, NYPD stop-and-frisk, and NYPD street body scanners) are still awaiting rulings on dispositive motions, as they have been since April. I have no idea why these are going so slowly — the issues presented are hotly debated but not terribly complex. 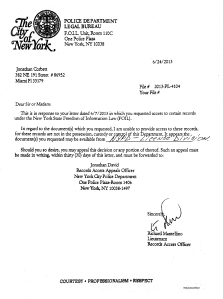 In other news, I sent the NYPD a public records request a few weeks ago on a matter completely unrelated to my lawsuits (I asked for information regarding how they determine whether to accept or reject pistol permit applications). The NYPD has a “FOIL Unit” that is a part of its “Legal Bureau,” which is where the request was sent. I got back a letter stating that they don’t have the records, but that “NYPD – License Division” may have them. So, essentially, the NYPD asks for records requests to be sent to a specialized department that, obviously, doesn’t have the records in their office and refuses to go and get the records. I’m presently awaiting a callback from Lt. Mantellino to explain why he feels that this run-around is in any way legal.

3 thoughts on “Some “Light Reading” from the TSA, Some Denied Reading from the NYPD”