After 5 years, my challenge to whether the TSA can disallow “opting out” of the body scanners has concluded with the U.S. Supreme Court refusing to hear the case.  The details of the case and the issue presented to the Supreme Court are well covered in a post earlier this year, so I won’t repeat them here.

The Supreme Court is busy, but it’s a bit disappointing that they didn’t take up this case, which raises a serious question as to when the citizens have standing to challenge infrequent or random searches — a question that the Eleventh Circuit approaches differently than any other Court of Appeals in the country.

The door is still open to anyone who wants to sue after being denied an opt-out request, but challenges exist there as well, and frankly, it is sad that the citizens have to wait to actually be violated by their government before they can ask the government to be enjoined from abuse.  That said, if you’ve recently asked to opt out of the body scanners in favor of a pat-down, but TSA has refused, please be in touch and I would gladly consider your case. 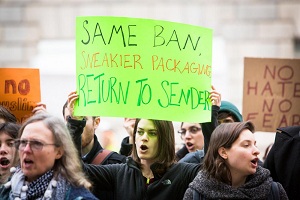 First: No, this was not a vindication of the “TRAVEL BAN.”

The U.S. Supreme Court today issued an opinion on the preliminary injunction entered by the 4th and 9th Circuits, as well as the government’s request that they hear the case (a “petition for certiorari” — that word is pronounced “sir-she-uh-ruh-ree,” for those wondering).  The tl;dr:

We grant the petitions for certiorari and grant the stay applications in part.

So, the Court will hear the case in the fall, but what part of the injunction did they put on hold?

The injunctions remain in place only with respect to parties similarly situated to [the plaintiffs].  In practical terms, this means that §2(c) [and §6(b)] may not be enforced against foreign nationals who have a credible claim of a bona fide relationship with a person or entity in the United States.

What it boils down to is this: the plaintiffs in this case were all alleging that they were denied access to attend to their family or business in the United States.  When you file a lawsuit, as a general rule, you can only ask the court to help you, not to right a wrong against the public.   Even if your case is a class-action, you can only seek to reach people “similarly situated” to you.

The lower courts enjoined the government from applying these two odious sections of the TRAVEL BAN to anyone.  But, since some people seeking entry have no connections to the U.S., those people are not similarly situated to these plaintiffs, and thus the Supreme Court narrowed the injunction to only those with some connection to U.S. persons or entities.