Woman Sues TSA for Inserting Fingers Inside of Her During “Search” 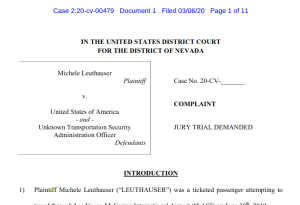 Michele Leuthauser was traveling from Las Vegas-McCarran International Airport last June wearing yoga pants that should have made it quite easy to determine that she was concealing nothing on the lower half of her body.  But, because the TSA uses body scanners with a false positive rate somewhere in the range of 20-40% (some studies higher), Michele was flagged for additional screening: a pat-down of her “groin area.”

Unfortunately, a yet-to-be-identified TSA screener used this as an opportunity to violate Michele.  While typically body scanner alarms are resolved with a quick and limited (yet still often invasive) pat-down right next to the machine, the screener directed Michele to a “private room.”  Screening in a private room is supposed to be an option offered to passengers who feel more comfortable (an option I advise all travelers against taking at all costs), but for Michele it was mandatory. 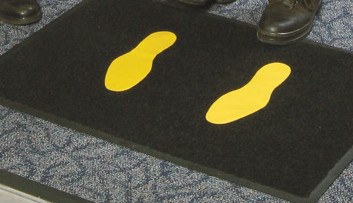 When doing pat-downs, the TSA has little mats with footprints painted on to indicate to the passenger how to stand.  But, the screener told Michele to spread her legs far wider than the mat — an order that seems common for TSA screeners about to inflict abuse.  She then proceeded to rub her hand on Michele’s vulva, pressing firmly enough to penetrate her labia with her finger through her leggings, and then continuing to rub her vulva until Michele, in shock, finally recoiled and told the screener to stop.

On Friday, I filed suit on behalf of Michele after TSA supervisors, local police, and TSA’s Office of the Chief Counsel refused to do anything about this incident.  While TSA policies (and the Constitution) obviously prohibit checkpoint body cavity searches, no one seems to care when normal screening turns to blatant sexual assault.  I look forward to giving TSA incentive to care in the U.S. District Court for the District of Nevada.