I just passed through a TSA checkpoint at Miami International Airport, where, during my pat-down after opting out of the body scanner, I was placed directly facing a monitor that showed a laptop that was being screened (notwithstanding that TSA policy is that such screens should be hidden from view of passengers).  From that image, it was clear that components underneath the battery of the laptop were indeed visible to the operator, and looked more like this image posted by bomb-detection specialists DSA Detection: 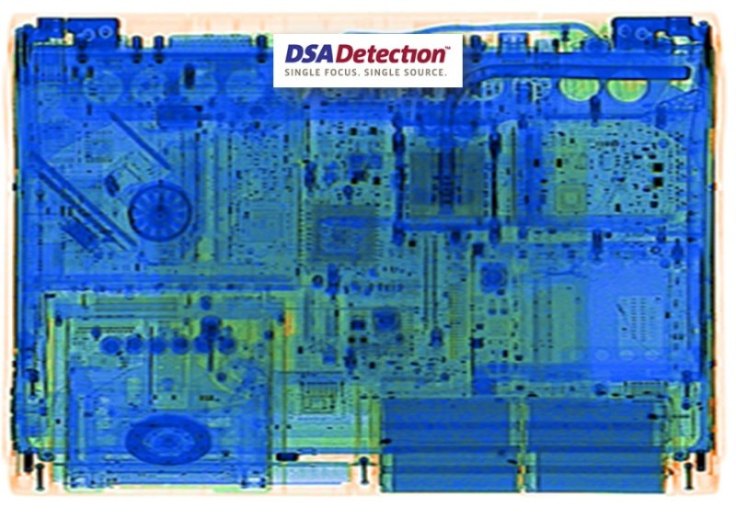 In other words, lithium batteries are not completely opaque “black boxes” which airport x-rays cannot penetrate.

DSA Detection has been nice enough to publish a how-to guide to detecting explosives concealed in a laptop.  While the guide doesn’t go through how to detect an explosive specifically concealed within a battery, it is clear that the x-rays can penetrate through the battery.  Given that materials of different densities are color-coded differently, and given that the density of PETN is 1.77 g/cm3 and the density of C4 is 1.73 g/cm3, but the density of lithium metal is 0.53 g/cm3, there should be no reason why a properly calibrated x-ray with a well-trained and attentive operator cannot tell the difference between a lithium battery and a box filled with explosives.

Now, are the x-ray machines in the 10 airports subject to the current laptop ban of the newer technology which produces images like the one shown here, or the older that produces images like in my previous post?  I must assume that if DHS has used any logic whatsoever, these 10 airports are using the older technology and that’s why they’ve been shit-listed.  But there is no way all of Europe uses this older technology, and I truly hope that DHS’s European counterparts continue to resist the nagging of DHS to ban carry-on laptops anyway.  DHS should be helping any airport with inferior technology or training to get up to speed, not treating everyone outside of the country as if they are inept and inferior (especially when comparing others to the TSA… you know what they say about those in glass houses…).