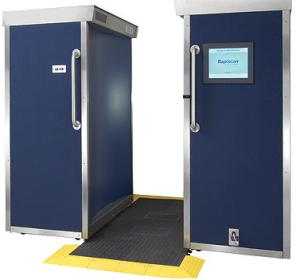 A few weeks ago, scientific researchers from top universities released a report confirming my 2012 demonstration that anything can be easily smuggled through the TSA’s nude body scanners. While this (again) made headlines all over the world, the media seemed to have missed one detail that the scientists noted at the end of their study as an addendum: they measured the radiation dose given by these machines and found it to be way higher than admitted.

People were rightly concerned about being dosed by x-rays as a condition of flying from the moment the TSA suggested using nude body scanners. You may recall that the TSA dismissed these concerns — their official line from the very beginning regarding radiation safety:

Backscatter technology projects an ionizing X-ray beam over the body surface at high speed. The reflection, or “backscatter,” of the beam is detected, digitized and displayed on a monitor. Each full body scan produces less than 10 microrem of emission, the equivalent to the exposure each person receives in about 2 minutes of airplane flight at altitude.

“One full body scan” means one front and back scan, as the Rapiscan systems in use at the checkpoints did both the front and back of your body simultaneously, and the TSA assures us that “1 scan” will dose us with no more than 10 microrem of radiation.

Yet when these independent scientists from University of California at San Diego, the University of Michigan, and Johns Hopkins, who were not commissioned or endorsed by the government, ran the same tests, here’s what they found:

Units are tricky with radiation because they are really small and change between “rem” and “sievert” (1 rem = 0.01 sievert), but the scientists are saying that 1 scan = 73.8 nanosievert = 0.0738 microsievert = 7.38 microrem. The TSA promised less than 10 microrem, so it sounds like the TSA was right… right?

Of course not. The scientists, unlike the TSA, did not measure front and back at the same time:

To irradiate them sufficiently, we performed 4033 consecutive single scans in the machine’s normal operating mode. (Each screening consists of at least two such scans: one front and one rear.)

This means that in order to get front and back, just like in a real TSA screening, we need to approximately double that number and get 14.76 microrem per screening, or about 50% more radiation than the TSA admitted to back in 2010 (or has admitted to ever). While these scientists still conclude that this is a low dose of radiation, it shows that, if correct, we were lied to, again, and anyone who walked through those scanners was given nearly 50% more radiation than they signed up for.

I asked the scientists from the study for comment before publication, and I received a reply from Keaton Mowery at University of California, San Diego, that noted that these kind of measurements have a large margin of error. Well, since these backscatter x-rays are decommissioned and sitting in a warehouse, perhaps it’s time that the government open them up to full scientific study so that we can all know what we were dosed with as a result of the government’s rush to deploy horrendously expensive security theatre that, as study has shown, actually make it easier to sneak weapons through than with an old-fashioned metal detector.