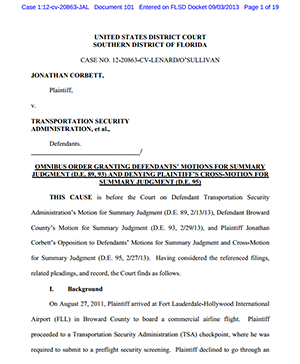 Moments ago, the remaining claims in my lawsuit stemming from being illegally detained at FLL airport and then lied to about the existence of CCTV video of the incident, were dismissed.

The questions before the court were as follows:

On top of this recent heap of fail, Judge Lenard had previously tossed the bulk of my lawsuit — 19 out of 21 charges — and then refused to allow me to appeal those 19 charges until she contemplated these two remaining charges. She then took 6 months to write this 19-page opinion. Her decision today, therefore, is not much of a surprise to me, since Judge Lenard seems to be more inclined to rubber-stamp government thuggery, through convoluted, ill-supported, and needlessly delayed rulings, rather than to dispense justice. I will be filing a notice of appeal this week, sending this case to the U.S. Court of Appeals for the 11th Circuit, and I am strongly tempted to file a complaint of judicial misconduct based on her purposeful delay of my case and the sheer absurdity of some of her arguments. But, appeal first, misconduct complaint later.

Donate to help fund the appeal?
…or via Bitcoin: 15ftA2938sp7Mnsi8U7wYVmEtd4BRbFnkT