A couple months ago, U.S. District Judge Joan A. Lenard dismissed much of my lawsuit from when I was detained in FLL airport for refusing to let the TSA “touch my junk.” Two of the 21 claims my lawsuit were allowed proceed, and I’d like to appeal the 19 dismissed counts immediately. In order to do that in federal court, I need to have the judge essentialy sign off that those 19 counts are “done.” You might think that it would be obvious that they’re done since they’ve been dismissed, but since the entire lawsuit wasn’t dismissed, that “Rule 54(b) certification” is required.

The TSA, surprisingly, had no opposition to this, since as a party who is experienced in being sued, they understand that my appeal is as of right and will happen sooner or later. Broward County and its sheriff, however, wrote to the court to ask that she not certify that judgment is final on those counts, despite the fact that the appeal will happen eventually (after the 2 remaining counts are settled) even if the judge refuses to certify. I have no idea why they want to delay, since as a pro se litigant I have all the time in the world. The reply of the sheriff, however, was particularly hilarious: he spent more than a full page whining about how I travel around suing everyone and therefore the judge shouldn’t certify. Obviously, this is entirely irrelevant and untrue: I’ve gone after the TSA in one district ever.

So, I made this little infographic to help the court to parse the sheriff’s reply: 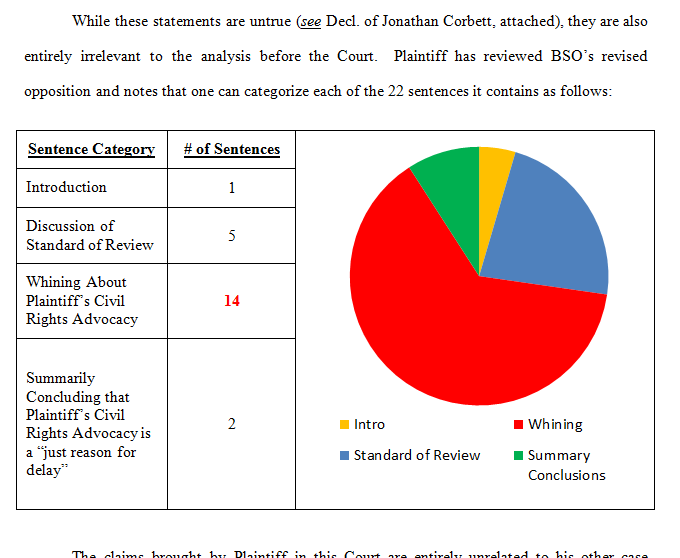 It sucks that tax dollars are being wasted on this futile motion, especially in light of the fact that I have offered to settle for changes to policy instead of money — an offer that was declined.