Should Universities Really Be in the Business of Adjudicating Rape Claims? 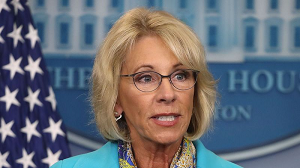 A few days ago, Secretary of Education Betsy DeVos rescinded informal guidance given by the Obama administration to universities as to how to apply “Title IX” — a law prohibiting discrimination based on sex in schools that accept federal funding.  Despite the public outrage and my general feeling that Secretary DeVos is unqualified for her role, I think she may have gotten this one right.

Why would I say such a thing?!

The guidance that she cancelled, known as a “Dear Colleague Letter” (full letter) attempted to persuade universities in particular to step up and deal with sexual violence on-campus.  This is, indeed, a laudable goal: no one should be subject to any kind of violence while pursuing their education, and sexual violence is a particularly pernicious and all-too-common strain of violence present in American colleges (…and it’s not just an American problem).  The problem is that Title IX deals with sex discrimination, and has been interpreted expansively to cover sexual harassment, but expanding even further to sexual violence is something that Title IX simply lacks the basis and framework to do.  The result: universities that attempted to implement the Obama-era guidance found themselves veering into the fields of law enforcement, prosecution, and the running of trials, when they were ill-prepared to do so.

Case-in-point: Doe v. University of Cincinnati, 2017 U.S. App. LEXIS 18458 (6th Cir., Sept. 15th, 2017).  “John Doe” was accused by “Jane Roe,” both students at University of Cincinnati, of having sex with her without her consent (something the court puzzlingly fails to call “rape” at any point in its 19-page opinion), while John maintained that the sex was consensual.  Jane made the accusation 3 weeks after the alleged incident.  “UC’s Title IX Office waited a month to interview Roe, another four months to notify Doe of her allegations, and yet another four months to convene the … hearing.”  Despite Jane failing to appear at the university hearing, John was found responsible for violating the code of conduct — in other words, the university alleged he was guilty of rape without any in-“court” testimony against him — and suspended him for 2 years.

Let’s be clear here where the university and even the courts were not: John isn’t accused of some kind of mere college code violation: he was accused of rape.  He would never be able to honestly explain to a potential employer the gap in his education and would certainly be infamous on his campus as the local rapist any time he stepped foot near the school.  And so, the U.S. Sixth Circuit Court of Appeals affirmed a lower court ruling enjoining the university from enforcing the suspension on due process grounds, ruling that the absence of any witnesses against him actually appearing and answering questions at a hearing, especially in combination with the school’s failure to promptly investigate and adjudicate the matter, did not constitute a fair hearing and thus was insufficient for the state (of which the public university is an arm) to take a life-ruining action against him.

It is certainly a good thing for colleges to have a mechanism to resolve petty disputes between fellow students, as well as to have programs to reduce sexual harassment and resources to support those who have been victims of any and all kinds of traumatic experiences.  In the case of actual sexual violence, however, why would we not turn the case over to real authorities, who have real resources to investigate this real felony allegation, to be tried in a real court, and upon conviction result in a real prison term?  It would seem to me that UC’s system is fair to neither the accuser nor the accused.  If this woman was indeed raped, a 2-year suspension from college is hardly sufficient punishment for the man who violated her.  And on the other side, anyone facing such a serious accusation deserves the rights we give to criminal defendants: to confront his witnesses, to gather and present evidence, to be represented by competent counsel, and to otherwise have the very fundamental things that we in this country take for granted as necessary before society will take away someone’s liberty.

Secretary DeVos probably could have accomplished the above by modifying, rather than rescinding the entirety of, the Dear Colleague Letter.  But, to the extent that her point was that schools should be in the business of educating, not in the business of operating as a complete legal system, I think she may have a point.

One of the more interesting (sometimes, disturbing) parts of “my job” is that I get e-mails from people across the country on a regular basis describing abusive TSA practices.  These accounts range from descriptions of the TSA’s usual pat-downs, of which the author was shocked to realize happen that way, to descriptions of clear violations of TSA procedure, thuggish attitudes, and down-right sexual assault.  There is one common theme beyond blue gloves: a high percentage of the time passengers feel abused, it is when they go to “the private room.”

For those of you who have had a TSA full-body pat-down, you probably know the speech they give you: a description of how they’re going to touch you, a note that they’ll be using the back of their hands on your “sensitive” areas, a question as to whether you have any injuries or medical devices, and finally, an offer to conduct the screening in private.

For the love of god, please do not take them up on this offer.

If you think I may be exaggerating, here’s an example of the kind of e-mail I get (warning: graphic):

This kind of sexual assault happens all the time, leading to a headline in 2011 where three different senior citizens in three different incidents accused the TSA of strip-searching them in the private room. But most of the time, stories like these get no media attention. The victim may file a complaint, and nothing happens.

Catching your flight is just not worth it.  Please help me get fewer e-mails like this and spread the word.

P.S. – One more suggestion, if I may: tuck your shirt into your pants before a pat-down.  If you do so, you won’t be asked to lift up your shirt, and you won’t feel their latex-coated hands on your bare skin.