In the beginning of September I was deluged with messages alerting me to a problematic security search at a well-attended New York City music festival: 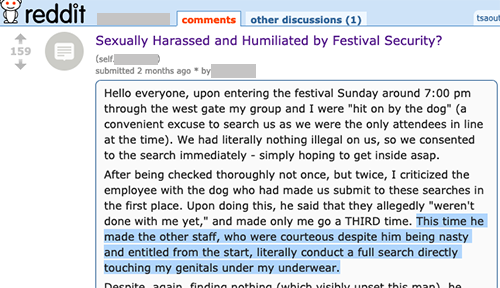 After speaking with several individuals who encountered abusive security, as well as one employee from the contracted third-party security company who came forward, attendees alleged security dogs picked people out of the security line to receive an invasive search in a tent the security company had set up just for that purpose.  Inside the tent, some attendees claimed they were ordered by security to take off their clothes, or had their clothing pulled away from their body so that security could look down their shirt or pants at their genitals and breasts.  Others alleged security simply reached their hands inside of their undergarments and directly touched their intimate areas.

Unfortunately, it was explained to me by the security guard who came forward to me that festival security company CSS Security was short-handed and brought in out-of-state security guards to fill the gaps.  It does not appear that those guards were properly licensed, and at least some of them would have been ineligible to be licensed because of criminal history.

I represented three individuals who claimed to have been subject to searches like these, and can say that a full and final settlement was reached on the matter with CSS Security to resolve all of my clients’ claims on the matter.